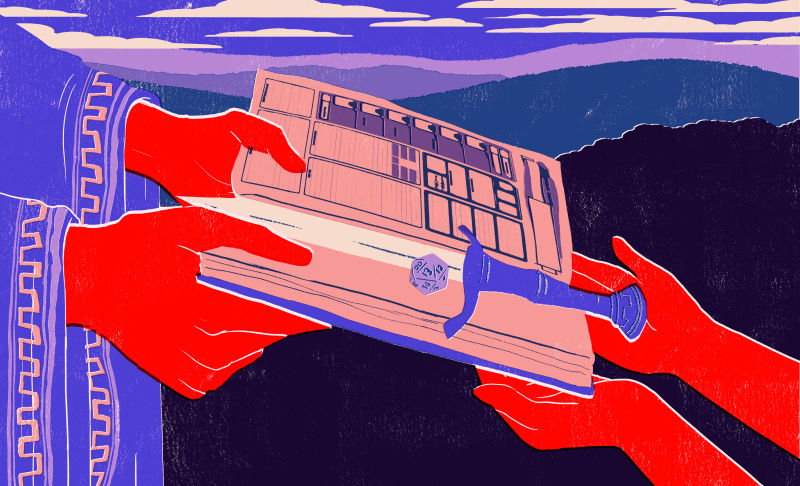 Once upon a time, I was a wizard named Gandalf. It is an unimaginative moniker, admittedly, but it came from a tween who just finished reading the Lord of the Rings trilogy. As Gandalf, I knew a few common spells, for protection and attack, and could speak dwarvish. I declared my alignment to be Lawful Good, naturally, and went about my business seeking gold and magical treasure.

By the time I rolled ability scores for Gandalf—my first role-playing game character—Dungeons & Dragons had been out a couple years. My most geeky friends and I would get together on Saturdays or during sleepovers to pretend we were medieval fantasy heroes, battling Lizardmen and Beholders in search of the elusive +2 Vorpal Blade. Even as I stashed my 20-sided die into storage when I headed to college, I couldn’t wait for the day I could get it back out and role-play with my kids.

In 2010, I bought my two sons the Fourth Edition starter kit for D&D, which is made of a collection of nuanced rules. The game lost my kids’ interest before their first characters could swing an axe.

I could empathize. Arguing fine print is as much a signature of the game as the crazy dice. Many of my D&D sessions as a kid and an adult wasted lots of time trying to get an adventure started, or looking up specific rules as situations surfaced. To make my childhood pastime more accessible to my kids, I had to iterate.

At the time, my solution was coming up with a stripped-down version of D&D (“DnDish”) that threw out all but the most essential parts of the experience. In doing so, I gutted the rules and only kept the crucial parts: Create a character, Roll the dice, Level up. The rest relied on our collective imagination.

With the release of the Fifth Edition of Dungeons & Dragons in 2014, the official rule set now addresses some of the obstacles my family encountered trying to learn the game. However, there are still some things you can do to simplify 5E and improve the experience for your kids.

The biggest threat to an enjoyable RPG session is attention span, so all of your house rules should be implemented with three goals in mind:

These goals can be achieved with a combination of rules omissions and game preparation by the Dungeon Master, the person most responsible for moving the adventure forward.

Hide What You Don’t Use

Battling some easy monsters early will help a new player learn how their armor, weapons and magic work. That knowledge will last into future sessions, but the little-used bits will likely to force a DM to consult the books. While you thumb through one of the three main D&D guides or surf an online resource, your kids may find more interesting things to do. To avoid costly reference checks, don’t play with the parts that prompt research.

When you can’t eliminate reference checks, consider making the information you need easier to find. Create simple one-page cheat sheets that contain only the most useful information. Try to reduce all the books into four key pages—Character creation, Player actions, a Shopping list, and Leveling up. If something doesn’t fit on a sheet, don’t use it.

Decisions Are an Investment

In D&D, a lot of decisions are required to create your character. For new players or those attempting to use an unfamiliar character class or race, those options can delay the start of action for everyone. The quicker you can get to the first monster, the better.

There are 9 core races and 12 classes in 5E, though most are rarely used. You can reduce a lot of complexity by making everyone use a Human Fighter as a character template, but let them play as anything they can imagine. In my own kids’ adventures, we had Oracle Ducks, Toddler Plumbers, and Walking Goldfish Chef Wannabes. Under the hood, though, is a single D&D archetype.

Some boxes on the standard D&D character sheet are vital. You need a name, of course, and an alignment. (Kids usually choose Lawful Good, but play Chaotic Neutral.) Ability scores and their modifiers drive most of the game play. There are also a handful of derived stats—like initiative, passive wisdom, armor class, speed, and hit points—that are used regularly. The rest of the sheet looks open-ended but is actually backed by a lot of structure found in the Player’s Handbook. If you replace that structure with negotiation, kids’ imaginations will create their own constraints.

Don’t offer an option to play a pre-rolled character. While that will certainly get you to game action quickest, players tend to be less invested in characters they didn’t create. That makes it easier for them to disengage later or make reckless choices in game.

When creating characters, it isn’t uncommon to see a bunch of low numbers and hear, “That didn’t count.” Re-rolling to get an acceptable set of high numbers guarantees your character will start strong, but playing with low scores inspires creativity.

In FATE, another RPG platform, character traits are treated as double-edged swords. Every strength can be a weakness, and vice versa. This is a valuable perspective to take when encouraging kids to play with bad rolls. The DM has the power to make use of ambiguity to reward weaker characters for embracing their faults, or to turn strengths against others. The smartest tactician can overthink a plan, and the dumbest tank can be insightful.

Rolling dice is the most enjoyable part of an RPG. It combines player control with destiny. Since the dice only come out when there is some challenge to overcome, there is always an anticipation that the story could take a dramatic turn. Players shouldn’t be rolling dice for every action, but asking a character to roll when player attention wanes will increase engagement for everyone without having to rely on endless monster battles.

In D&D, there are typically seven dice—d4, d6, d8, 2d10, d12 and d20—but most of the action can revolve around just two. A 20-sided die is used heavily in battle and in skills checks. Rolls of 20 (critical success) and 1 (critical failure) allow the DM to augment an outcome to cause extra joy or pain to a character. d20 is the signature die for D&D.

The rest of the dice are most often related to damage inflicted by different weapons or to facilitate larger lookup tables. By replacing these dice with the most familiar one—d6—you can reduce the frequency of the common question, “Which dice to I use?”

Clearly Separate the Context of Conversations

Bored kids get goofy and say funny things. There is a difference, however, between Susy insulting an Orc and her character Pickles the Bard doing it. Within a game, poor behavior can have deadly consequences. Out of the game, the DM and players can talk more freely without their characters picking an unwise fight.

Use of conventions like “In Game” and “Out of Game” help to delineate what is exploratory or offhand and what is a game decision that could impact the narrative.

End Before They Are Ready

The younger the kids, the less stamina they likely have for a long gaming session. I try to adhere to a Three Encounter rule, where the goal is to get three opportunities for experience in any gaming session before stopping. This means a 90 minute to 2 hour session is a reasonable duration, long enough to get players in a flow but not so long that we’ve overstayed the welcome.

It helps future game play to wrap things up while the players are all paying good attention. Gaming sessions are like episodes in a TV show. While I try to resolve the last encounter before closing the session, I like to leave with a hint of the next mystery or drop in surprise character at the end. Doing so generates conversation in between sessions and makes it easier to ramp up the next time we play.

Leveling up a character is an intermittent reward for continued play. The economics of experience points is such that it takes an increasing amount to reach the next level. In D&D, point values vary from one monster or action to the next. Rather than deal with those nuances, I award the same points for each encounter. Every character who participates earns those points. Forward movement in the story is still incentivized—the more encounters, the more points—but it de-emphasizes individual achievement.

Don’t delay gratification. Because my kid-focused games have unreliable attendance, we have to deal with characters who don’t progress at the same pace. The last thing I do in a gaming session is award experience points. This avoids an awkward situation in the next session where some players have to watch as others use previously-earned points to increase ability and power.

Unless you enjoy rolling up new stats and backstory every week, it is a good idea to collect the character sheets at the end of each session. Not only does this lessen the chance of a player losing theirs, but it allows you to review the character abilities between sessions to cater the next chapter of the adventure.

Between doodling and injury, a character sheet can become overrun with pencil marks. If you keep a digital copy of the character sheets, you can update and reprint them to keep everything legible.

A DM should know how to play the full game, even if the players don’t. If you are brand new to D&D yourself but are interested in learning it, odds are good you already know someone who runs a game. An estimated 20 million people have played D&D since it was created, and the long public playtesting of 5E has resulted in a resurgence of interest in the RPG. Once you know the rules, it will be easier to find the places to break them and make the experience more enjoyable for your kids.