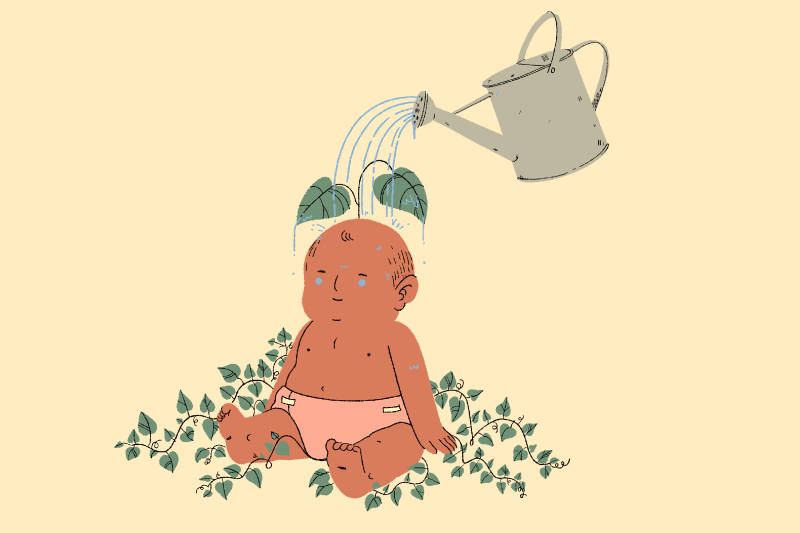 When it comes to raising a healthy vegan kid, the challenges often aren’t so much nutritional as they are social. Raise your kid vegan, and you’ll hear everyone’s opinions and advice about it, whether you ask for them or not. And even within your own family unit, you’ll need to consider how to talk to your kids about why they’re vegan—whether it be for their health, the environment, animals, or all of the above—and how to properly approach their nutrition.

We spoke with health and culinary experts (several of whom are vegan parents themselves) to get the lowdown on what you need to know to raise a healthy vegan kid. Here’s what they had to say:

Sort Through All the Health Data

Generally speaking, plant-based diets are thought to offer protection from the most prevalent chronic diseases—but the potential benefits for kids aren’t only long-term. “Many of the common allergens—namely, fish, shellfish, dairy, and eggs—are naturally omitted on a plant-based diet,” The Plant-Based Dietitian Julieanna Hever (MS, RD, CPT) says. If you have a child with allergies, know that a vegan diet is a totally legitimate way to go.

The Academy of Nutrition and Dietetics agrees and states in its position paper on vegetarian diets that appropriately planned vegan diets “are healthful, nutritionally adequate, and may provide health benefits for the prevention and treatment of certain diseases.” It adds that a vegan diet is appropriate for all stages of the life cycle, including pregnancy, lactation, infancy, childhood, and adolescence, and is suitable for athletes.

A kid on a well-balanced vegan diet can be as healthy or healthier than any other kid. The only supplement a balanced vegan needs is vitamin B12. But if you have a picky eater or want to be sure to cover your bases, a vegan multivitamin also can’t hurt, Hever says.

If you’re breastfeeding and are vegan yourself, the CDC and ADA recommend supplementing B12, as well. Dr. Klaper suggests supplementing your diet with 500 mcg of methylcobalamin (a form of B12) five to seven times per week and 300 mg of (algae-derived) DHA per day in order to make sure you’re getting enough Omega-3s.

Have a Good Response Ready for ‘The Protein Question’

One of the most common questions vegans get is, where do you get your protein? If you’re raising your kids vegan, you’ll definitely want to have a good response ready.

Here’s a short list of vegan protein sources that should come in handy: beans, lentils, soy milk, tofu, tempeh, seitan, vegan meat products, peanut butter (and other nut butters), nuts, pumpkin seeds, edamame, quinoa, and oats. To give you an idea, one cup of soybeans contains 28.5 grams of protein (roughly the same amount as you’d get in 4 oz of red meat or half a chicken breast), while other beans tend to have around 15 grams per cup. A cup of oatmeal has 4 grams of protein, while two tablespoons of peanut butter has 8 grams. So long as they’re eating a variety of these foods, you don’t need to overdo it. According to national dietary guidelines, a child aged 1-3 should get 13 grams of protein a day; a 4-8 year old, 19 grams; 9-13 year old, 34 grams; and a teenager between 46-52 grams.

So what does a balanced vegan diet look like otherwise? According to this Permanente Journal from 2016, adults should have 5+ servings of vegetables, 2-4 servings of fruit, 6-11 servings of whole grains, 2-3 servings of legumes, 1-2 ounces of nuts, and 1-3 tablespoons of seeds like chia and hemp a day. Depending on the age and appetite of your child, you can adjust that ratio accordingly.

Start the Day with a Smoothie Disguised as Ice Cream

Put a smoothie in a bowl with some toppings and you can call it dessert for breakfast; just use less liquid to make it more like ice cream.

“We start our day off with a smoothie that is packed with nutrients, so even if they eat snacks or just bread the rest of the day, you can feel like they started their day off well and at least consumed some fruits and veggies,” says Jenny Engel, one of the vegan chefs behind Spork Foods.

Spirulina makes a smoothie a fun blue hue, while adding just a little cocoa or carob powder makes a health shake look like chocolate ice cream. For extra fun, make a smiley face out of bananas, granola, nuts, and seeds. For a high-protein smoothie, use a vegan protein powder, and nut butter or this smoothie formula (minus the added agave).

It’s important to set healthy eating habits early, and to make children feel involved in the kitchen and connected to their food. Work together to grow a garden, shop with them at local farmers markets, and have your child participate in selecting, shopping for, and cooking the recipes you make. The more they feel a part of the process, the less likely they are to rebel against what you feed them—this is true for kids and food whether you’re a family of vegans, omnivores, or anything in between.

“I get them excited about food by cooking with them and growing vegetables in the garden,” says vegan chef Sepi Kashanian. “They want to taste the salad they made themselves.”

Plant-based doctor Michael Klaper suggests that kids’ earliest snacks should be simple—things like carrot and apple slices and broccoli florets, lightly steamed at first, then raw. “If you don’t introduce them to junk foods, they won’t develop a taste for them,” he says, adding that it’s key to set the example. “With kids, the recorder is always on, and it’s important they see their parents eat the same healthy foods that they are told to eat.”

Don’t Assume Certain Foods Are Too Advanced for Their Palates

In that same vein, if you don’t want to have a picky eater on your hands, you’ll be better off introducing your kids to all the same foods you eat as early as possible. Kashanian says she mostly cooks for her daughter the way she would for herself, using plenty of spices, garlic, and onion. Get them exposed and habituated to every vegetable there is as early as possible, and don’t assume they won’t like spinach, kale, or Brussels sprouts.

“If you start your child off seeing all sorts of different foods in the house, and on the whole family’s plate, then it becomes normal to incorporate these foods into their diets,” Engel adds.

But Be Patient with Picky Eating

If you do face picky eating, try to remember that almost every kid goes through it, no matter their diet. To make food extra fun, utilize the rainbow of colors in a plant-based diet with recipes like fruit kabobs or rainbow Buddha bowls.

“We don’t make our kids eat their vegetables to get to dessert, because that can reinforce the idea that veggies are the gross stuff you put up with to get to the prize at the end of the meal,” Engel says. “We just present it in small amounts and ask a few times if they’d like to try.” And if they don’t want to try? It’s your call whether you prefer a tough love approach, but you can always fall back on picky-proof options like PB&Js, vegan nuggets and burgers, and of course, smoothies.

If You’re Transitioning Their Diet, Learn Easy Swaps for Their Favorites

There’s a saying vegans like: “Anything you can eat, I can eat vegan.” And it’s true. There are so many substitutes and ways to veganize common dishes that your kids will never have to go without their favorite foods (even if they subsist on mac and cheese, pizza, or yogurt). Check out this article for simple vegan swaps, this guide to healthy vegan eating, this Trader Joe’s shopping list, and these vegan hacks, and know you can get free live coaching and nutrition consultation at ChooseVeg.com. Vegan recipe sites like Bosh, Vegan Richa, Vegan Yack Attack, and Minimalist Baker are also excellent resources for simple and fun recipe ideas.

Have Quick Go-To Meals That Aren’t All Microwaveable

While there are lots of good

Don’t assume kids can’t handle the truth. In fact, the more you help them understand why your family chooses to be vegan, the more they’ll be able to make informed decisions at birthday parties and school.

Whatever your particular reasons for choosing a plant-based diet—you’re raising your child vegan because of a dairy allergy, other health reasons, or environmental or animal rights-related concerns—you’re going to want to explain that. Emphasize that if their friends have different diets, that isn’t a moral failing on their part. They should have an informed idea of why your family eats a plant-based diet, and be able to talk to friends about it without being judgmental. It’s also important to let them know that if they’re being teased at school for being vegan or asked questions they don’t know the answer to, they can always come and talk to you about it.

It can also help to introduce them to other vegans their age, whenever possible. There are lots of vegan kids and teens who are outspoken about why they choose not to eat animals. The burgeoning career of Genesis Butler is worth following with any kid, and you can follow hashtags like #VeganKidsofInstagram to share stories and ideas of other inspiring kids.

When it comes to healthy growth, you shouldn’t worry more than any other parent. Anecdotally speaking, the kids I’ve met who’ve been vegan since in utero are some of the biggest and heartiest eaters I’ve seen. When everyone from Olympic athletes to celebrities are going plant-based for their health, it’s no wonder that the diet is one that promotes healthy growth. Of course, every kid is different. “As long as the child maintains their curve on the growth charts and their energy is good, everything should be fine,” Hever says.