Although streaming movies for free might sound synonymous with piracy, there’s a bevy of free, legal streaming content on the internet. In fact, there’s almost an overabundance of streaming services.

Whether you’re looking for movies or television shows, finding streaming video is totally feasible. It just requires you to search in the right places. With that in mind, here are the best free movie streaming sites to check out.

What to Expect From These Streaming Sites

There’s a ton of free and legal video online, and as such you’ll find a real mix of content. A healthy portion of the movies available to stream for free are public domain works. Because these films have lapsed in ownership and fallen into common property, many sites host such video treasures. These are the sorts of films Mystery Science Theater 3000 (MST3K) used to watch and comment on.

But it’s not just B-movies available to stream online. Rather, many big budget releases can also be found. Often, these are ad-supported. Like watching a movie on television, you’ll have to sit through limited commercials. Nevertheless, movies are usually presented uncut. Just don’t expect to see the latest releases.

Instead, you’ll mostly see movies dating back anywhere from a few months to many years. Additionally, you can find some original productions, such as the Snatch TV series on Crackle. Need help figuring out what to watch next? These sites will help you find what to watch next.

It’s no surprise that YouTube ranks among the best free movie streaming sites you can find. There’s a ton of free films to pick from, including many public domain films from channels such as the aptly titled Public Domain Films and Public Domain Cinema. Furthermore, sites such as Popcornflix host full movies via YouTube.

There’s a fantastic mix, from gems like Plan 9 From Outer Space, to action movies such as Recoil with Danny Trejo and Steven Austin, cult classics including Curse of the Puppet Master, and more. You may have to dig for what you most want to watch, but for those with patience, YouTube is a treasure trove of free, legal streaming cinema. 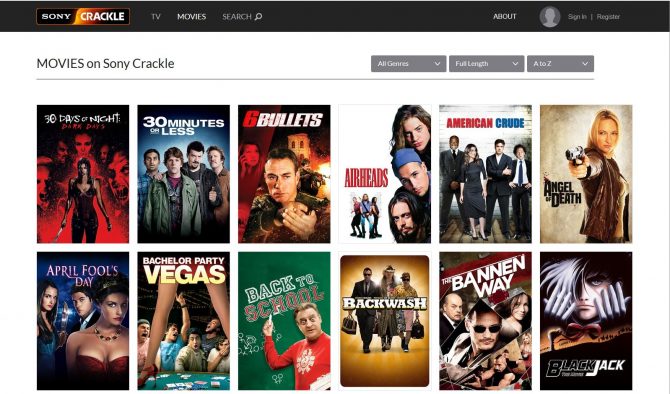 Boasting a solid array of syndicated content and original productions, Crackle is a must for any film buff. Its rotating selection varies, but you’ll find quality movies such as action comedy Hot Fuzz, gothic horror flick Bram Stoker’s Dracula, the masterful 1988 remake of The Blob, Rodney Dangerfield comedy Back to School, and I Know What You Did Last Summer.

Aside from films, Crackle features television shows such as Blue Exorcist, Seinfeld, and even original programming like its Snatch original series. With its robust lineup of movies and shows, we think Crackle is one of the best free Roku channels.

Although it’s anime-centric, there’s a mix of movies you can find on Viewster. Notably, Viewster features a robust line up of documentaries, films like Street Fighter II, and Lily C.A.T. Plus, you can legally stream shorts and television series including Murder Princess.

4. Vudu Movies on Us 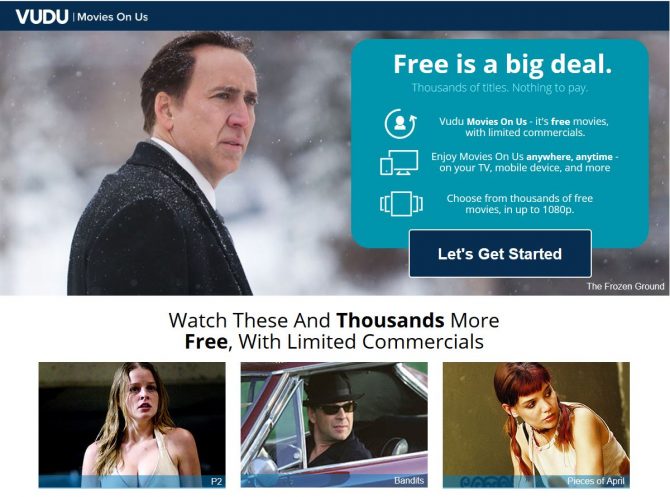 While Vudu is best known for its digital video rentals and sales, the Vudu Movies on Us section makes it one of the best free movie streaming sites. With a comprehensive array of movies such as Bull Durham, Showgirls, and Return of the Living Dead, it’s a fantastic service.

Vudu Movies on Us operates in a similar way to Crackle by providing full, uncut movies with limited commercials. Through hosting films with ads, Vudu is able to offer free movies and TV shows.

You still need to register for a Vudu account to use this service, but it’s totally worth doing so. Moreover, you can use your account to activate digital copies of movies and shows, as well as buy and rent movies from Vudu. 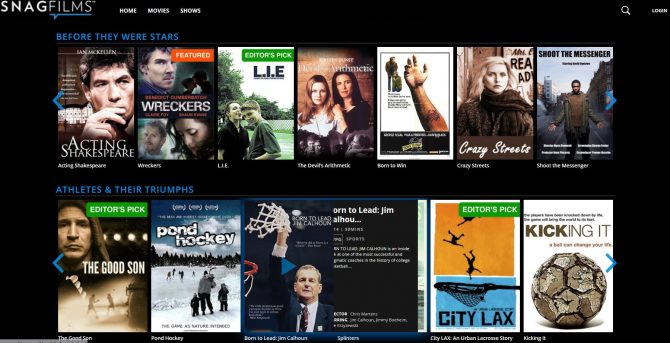 For a free Netflix alternative, check out SnagFilms. With unique categories such as “Before they were stars” and “Athletes & their triumphs,” SnagFilms specializes in fresh content. The library of more than 2,000 videos includes films, shows, and documentaries. Additionally, there’s a portion of original comedy shorts.

There’s a fantastic classic movies category as well. Don’t expect a ton of well-known fare, but for under the radar movies and more, SnagFilms is a gem.

Like Crackle, PopcornFlix presents full movies with limited ads. Here, you’ll find a range of movies in a rotating selection, from Sunset Boulevard and A Clear and Present Danger to Murder on the Orient Express and There Will Be Blood.

Flicks are segmented into categories such as popularity, genre, new arrivals, and staff picks, making PopcornFlix easy to use. With a beefy lineup and excellent navigation, PopcornFlix is an awesome choice for free, legal movie streaming.

Providing free movies and shows, Tubi TV is a fantastic service. Here, you’ll be able to view newer movies including Lords of Salem, A Most Wanted Man, and Bulletproof Monk, as well as older titles such as sci-fi cult classic The Running Man.

Helpfully, Tubi TV offers a “Leaving Soon” category so you can stream movies and shows before they become unavailable, and thus prioritize your streaming queue. You will need to register to watch mature content, but creating an account is painless enough.

Because Pluto TV features a live TV section, it’s easily one of the best free movie streaming sites. You can stream from the likes of Pluto Movies, Fox Sports, and specialized channels like Classic Movies and Horror 24/7. Plus, there’s an on-demand video library for instant movie watching.

With the live television aspect, Pluto TV is a must-have for cord-cutters. 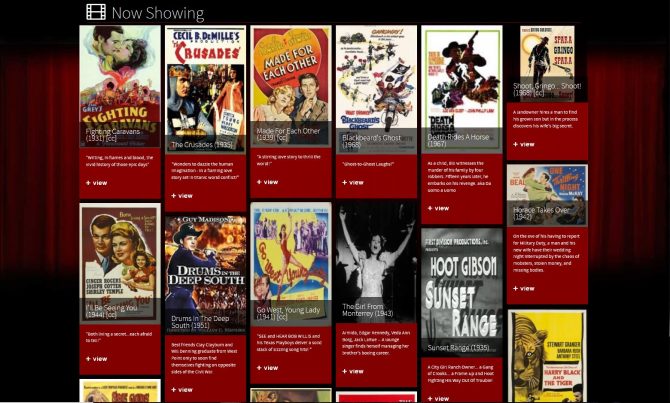 As the name suggests, Classic Cinema Online focuses on older, classic content. Even its website aesthetic captures a decidedly retro vibe with a backdrop of red theater curtains. You can find classics such as Casablanca, Jane Eyre, and The Wasp Woman.

However, the inclusion of movies such as Muscle Beach Party does call into question the definition of “classic cinema.” Nevertheless, Classic Cinema Online is pure gold for old school movies. 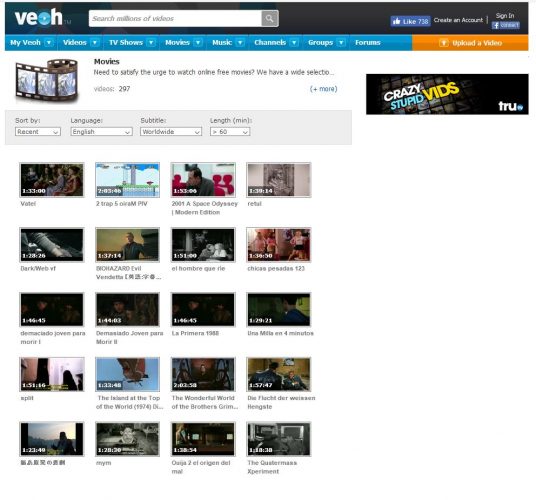 On Veoh, you’ll be able to stream tons of movies and shows. There are a lot of older films, such as Nosferatu. It’s akin to YouTube in that Veoh hosts user-submitted content and videos from established sources like CBS.

Since Veoh boasts a solid filtering system, you can select options such as language and video length to find what you want to watch. Veoh ranks as one of the alternatives to YouTube. Just beware of the popups.

You Just Need to Know Where to Look

If you know where to look, you can find loads of sites for (legal) free movie streaming. And if you’re looking to watch on something other than your computer these are the best media streaming devices worth considering.

Note: Your internet provider can throttle your video streaming speed. In that case, a VPN can mask your traffic and restore full speed. You might also want to use a VPN if you want to download videos.